Public transport: For information call the Traveline on 08712 002233 or visit www.lincsbus.info

Walk length: 7km (4.4 miles)
At a leisurely pace, this walk will take approximately 2 hours to complete.

Type of walk: The walks use a mixture of surfaced paths, tracks, field paths and roads. There are stiles and you may encounter livestock.

Welcome to Donington on Bain! This is a small village in the River Bain valley with a population of about 350 people. Some of the highest hills in Lincolnshire surround this lovely settlement and its farmland. Before becoming the village we see today, Donington was first recorded in the Domesday Book as ‘Duninctune’ with a population of 34! It is likely that the name comes from a personal name, someone called ‘Dunn(a)’ and their farmstead (‘tun’). But this village’s history goes well beyond just the medieval period… 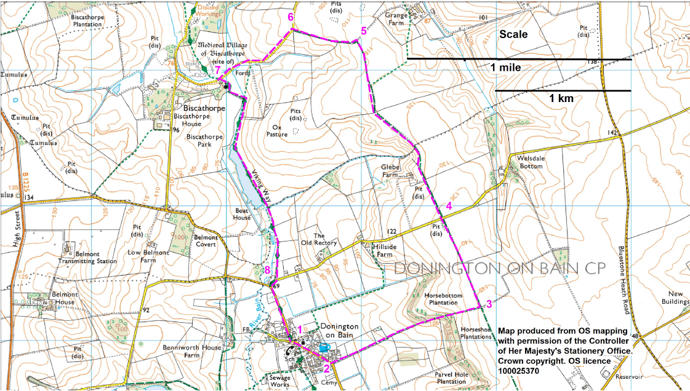 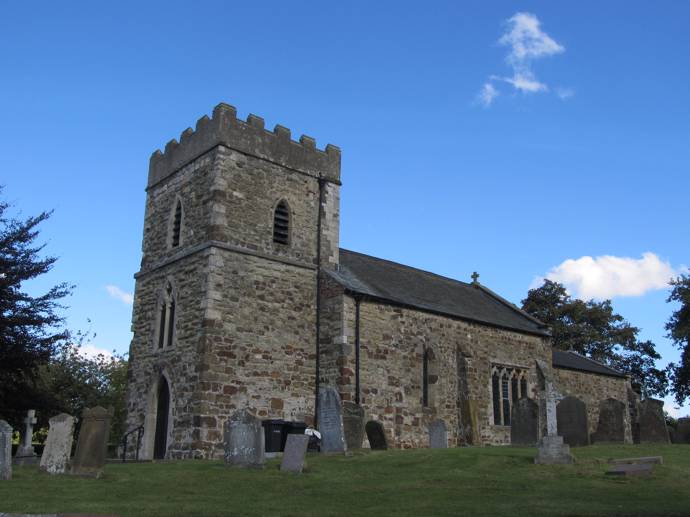 1. With your back to the church turn left and follow the road for approx.  300m to the edge of village.

The beautiful church behind you was probably built in the late 12th century. The church contains an early Norman font, which is even older than the church itself – which suggests that there was perhaps a wooden Saxon church in Donington before this one was built. 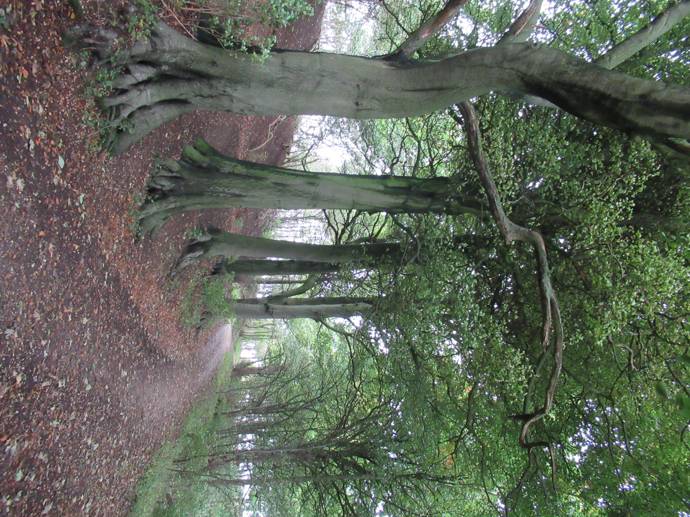 2. Just after Simons Close turn left onto the public footpath and follow the track uphill and through the trees.

Newer buildings in this area means that archaeological work has gone on here, and during these excavations, archaeologists found scatters of artefacts where people from the past may have dropped or discarded tools, pottery and rubbish. These scatters tell us that people were active in the area, going about their lives just like we do.

We know from scatters of worked flint that people during the Mesolithic and Neolithic were making tools in this area, throwing away the chunks they didn’t need anymore. They also show that in this area they were using scraper tools to turn hides into clothing and tents, and blades for cutting meat and material.

There are also scatters of Roman pottery, roof tile and glass from the 2nd to 4th centuries. The tile especially suggests there was a Roman building nearby, perhaps a house. We can start imagining the lives people were living, seeing the same things they would see day to day 1500 years ago.

Later on, we know from these excavations, that people lived here during the 10th and 11th centuries. Postholes were uncovered, showing us the places where timber posts for a house were placed, with a stone-lined hearth where the families living there would get their warmth and food.

Just from a few finds and features over a small area, we tread through thousands of years of human history.

You will walk under some large, mature, majestic beech trees.  They can grow up to 40m tall making them the queen of trees.  In spring lime green ovel leaves emerge and turn dark green with time.  In autumn look out for beech nuts or mast under the trees.

3. At the top of the hill and at a junction with a bridleway turn left.

The mast on your right is Stenigot. It might look like a pylon, but it was actually a radar tower built in 1938. The radar system warned Britain of impending attack from German aircraft during the Second World War. Stenigot was one of twenty Chain Home radar stations, stretching from the Isle of Wight to the Orkneys.  They were capable of detecting incoming aircraft flying at 35000ft, from a distance of 180 miles. 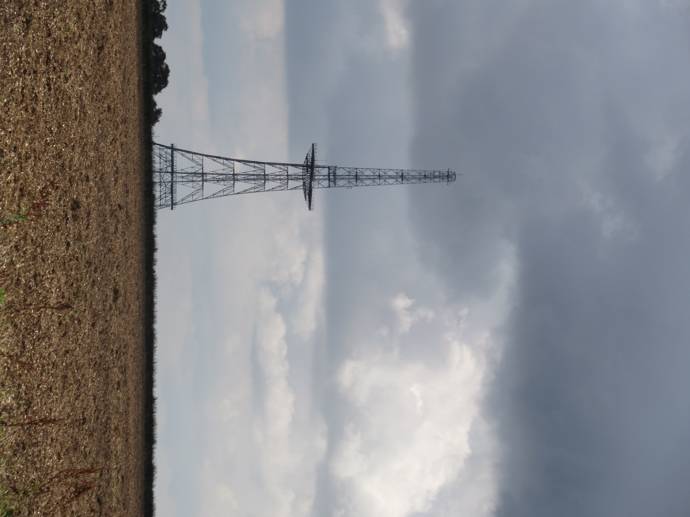 The Stenigot site had a new lease of life after the war and during the 1950s, with the addition of 4 large parabolic dish antennae, it became part of NATO’s cold war defence system providing early warning and surveillance.  It was operational until the early 1990s.

Follow the track for approx. 700m to a road.

In the field to your right are cropmarks which can be seen from above in the right conditions. They show us that there was prehistoric activity here. Though we can’t precisely date the features, we can tell that they are probably prehistoric because of the shape and location of the cropmarks. These could be boundary lines, marking out fields or enclosures for animals.

Just beyond the prehistoric cropmarks are medieval cropmarks, which show us field boundaries. Clearly this area has been used for agriculture for thousands of years. Think about all the farmers and labourers who have walked across this land to their fields over the course of time, perhaps on the very track you are walking along now, which we know from historic mapping has been where it has been used for at least 120 years.

4. Cross the road with care and continue along the bridleway opposite which follows the field edges and then along a grass track across fields to a stone track beside a hedge.

Through the trees to your left you may be able to spot Glebe Farm. This is a 19th century farmstead, which has been recorded as part of a county-wide survey of farmsteads. Traditional farmsteads and their associated buildings help to create local character and distinctiveness. Over the last few hundred, perhaps thousands, of years, they were important centres of community and economy in rural areas.

To the south of the farm is another prehistoric cropmark. While the farm represents a centre of activity for the post medieval period, this nearby cropmark represents a centre of activity for people in the Bronze Age in this area. It is thought this circular feature is a round barrow, which was a mound used as a burial place for a person over 3000 years ago.

Keep straight ahead along the track and bridleway, ignoring a footpath on the right.

5. At a junction with another stone track turn left continue along the public bridleway to a road. 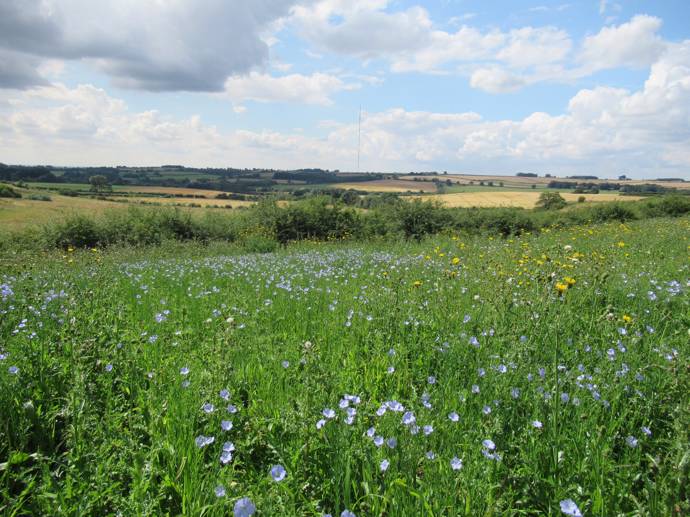 As you walk along this road, enjoying the views over the undulating countryside, think about all those who have walked this road before you. Though the Bellmont Mast or the pylons in the distance wouldn’t have been seen by people in the past, this landscape has changed very little.

Belmont broadcasting and telecommunication mast is 351.7m tall. When it was built in 1965 it was taller at 387.7m but in 2010 the top sections were removed.

6. Turn left and follow the road downhill to Biscathorpe.

You are now entering Biscathorpe. Only three buildings exist of this medieval village, but the ghosts of the old buildings linger as earthworks which you might be able to spy as lumps and bumps in the grass around you. Biscathorpe means ‘Bishop’s Settlement’, probably referring to the Bishop of Durham who held the manors of the village in the Domesday Book. At least nineteen people lived there at the time of Domesday, which gradually rose to 69 by 1856. In the earthworks we can still see traces of rubble walling connected by paths and fieldways to surrounding enclosures

Cross two bridges to a junction with the Viking Way in front of the house.

7.Turn left to join the Viking Way and follow the path beside the church wall to a gate.

To your left is St Helen’s Church, built in a fanciful Gothic style. If you stop to look around, you can spot more than fifty grotesque and medieval faces in the steeple. 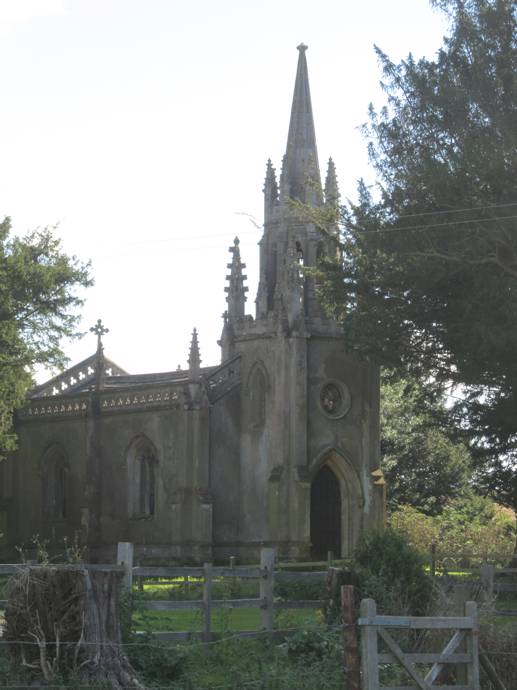 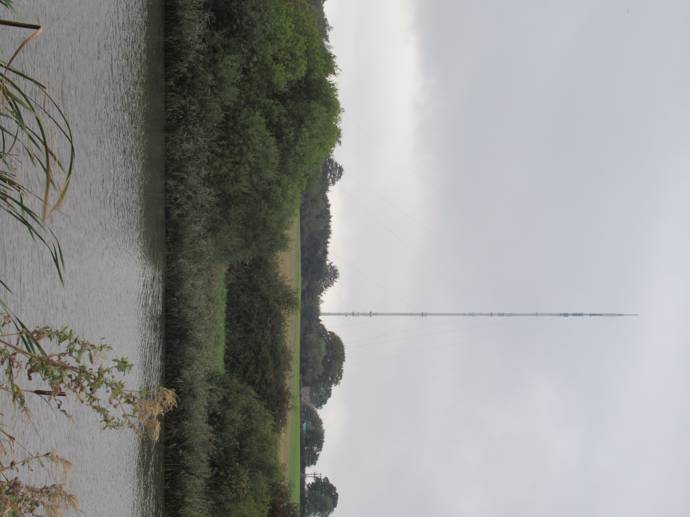 Go through the gate turn left and cross the river before turning right to follow the path beside the river for approx. 1.5 km (0.9 mile) to a road.

As you follow the path by the lake to your right, to your left are more prehistoric cropmarks of boundaries and enclosures. Further along are the remains of medieval ridge and furrow. Ridge and furrow is a distinct type of ox-driven ploughing and help us see the work of medieval field systems and how they relate to today’s field systems.

The path runs alongside the River Bain, a chalk river that rises near Ludford.  At Horncastle it joins the River Waring before joining the River Witham at Dogdyke.  The river gives the village of Donington on Bain its name.

8. At the road turn right and then at the T-junction turn left to follow the road into Donington on Bain and the starting point.

As you get onto the road and walk towards the T-junction, you can see the 18th century buildings to your right. These are a lovely block of buildings which were probably built at the same time of a bakery, mill house and stable block.